Recovery from the November 2019 bushfires in Northern NSW continued yesterday with the planting of another 100 trees at Huonbrook and the removal of exotic weeds to support the natural regeneration of the sub-tropical rainforest. 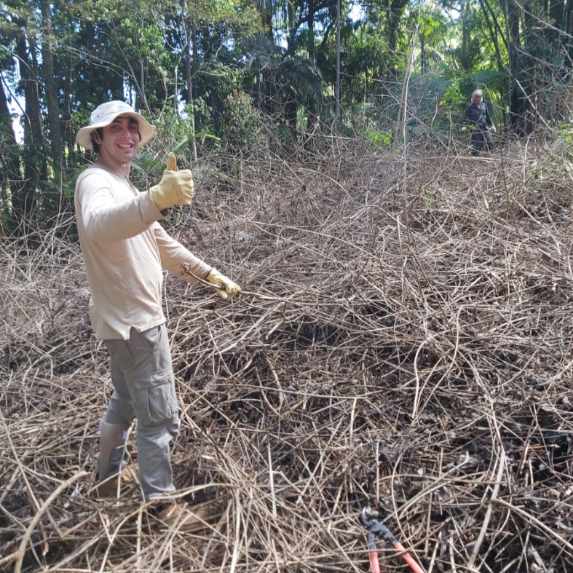 Funding from the inGrained Foundation is planting a total of 3,600 rainforest trees and helping regenerate many more. We are now on our way to achieving that outcome for Wildlife, Climate, People, and our Planet.

The rainforest regeneration work we are undertaking was achieved through the support of Madhima Gulgan Rangers. This is the bush regeneration team of the Madhima Gulgan Community Association that was established in 2008 to create employment and support Aboriginal people and their families. Rainforest 4 Foundation is involving the Madhima Gulgan Rangers in this project. As they work alongside our Rainforest Rangers they engage residents, landowners, and volunteers which increases the outcomes achieved. In addition to tree planting, yesterday the team spent a large part of the day removing exotic weeds to support the natural regeneration of the rainforest. The team also reported that plantings undertaken in May, June, and July have had a 100% survival rate. 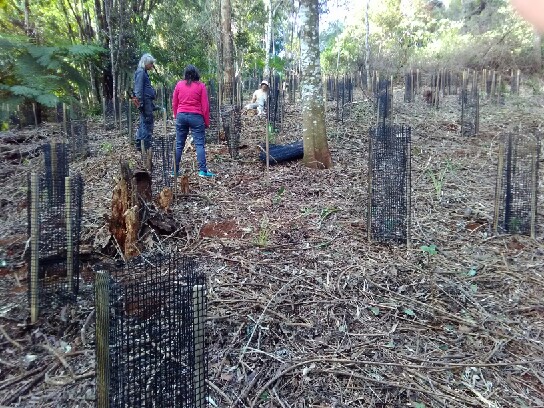 After clearing of Lantana we planted another 100 trees.
The unprecedented bushfires that occurred in Northern NSW in November and December 2019 burnt over 5,500 hectares and were named the Mt Nardi fires. They impacted the Nightcap National Park and the surrounding areas including the communities of Huonbrook and Wanganui inland from Byron Bay. As the fires approached residents of the valley the residents evacuated. When they returned they saw the fires had mostly burnt the sclerophyll forest (the eucalyptus and other hard leaved plants), along the ridgetops, however, the extreme conditions also saw fire burn the edge of the rainforest where it was eventually extinguished. Fortunately, no homes were lost however it was a big wakeup call and now they need to prepare for the future. With the support of the inGrained Foundation, we are helping the community to restore the subtropical rainforest as this fire-resistant vegetation will help mitigate the risk of future bushfires. The activities to be undertaken over 12 months will increase rainforest biodiversity through tree planting and the removal of weeds to facilitate natural regeneration. Two community workshops will also be held to help landowners manage fire in the landscape.