Introducing our Bushfire Recovery Project, situated in Northern New South Wales of Eastern Australia. How it all started and why recovery in this region is so important.

The unprecedented bushfires that occurred in the Byron Shire region of Northern NSW in November and December 2019 burnt over 5,500 hectares and were named the Mt Nardi fires. For Australia, it was the most devastating bushfire Australian wildlife and ecosystems have experienced in the last 50 years.

The bushfires followed a prolonged period of drought that contributed significantly to creating ecological conditions favorable to bushfires.

The fires locally to this region impacted the Nightcap National Park and the surrounding areas including the communities of Huonbrook and Wanganui inland from Byron Bay where residents and landowners were faced with the flames and the aftermath. Both World Heritage National Park and rainforest on private property were burnt. All of this rainforest is ecologically significant with the second highest biodiversity value in Australia

As the fires approached residents of the valley had to evacuate and when they returned it was to a new reality. The fires mostly burnt the sclerophyll forest (the eucalyptus and other hard leaved plants), along the ridgetops, however, the extreme conditions also saw fire burn the edge of the rainforest where it was eventually extinguished. 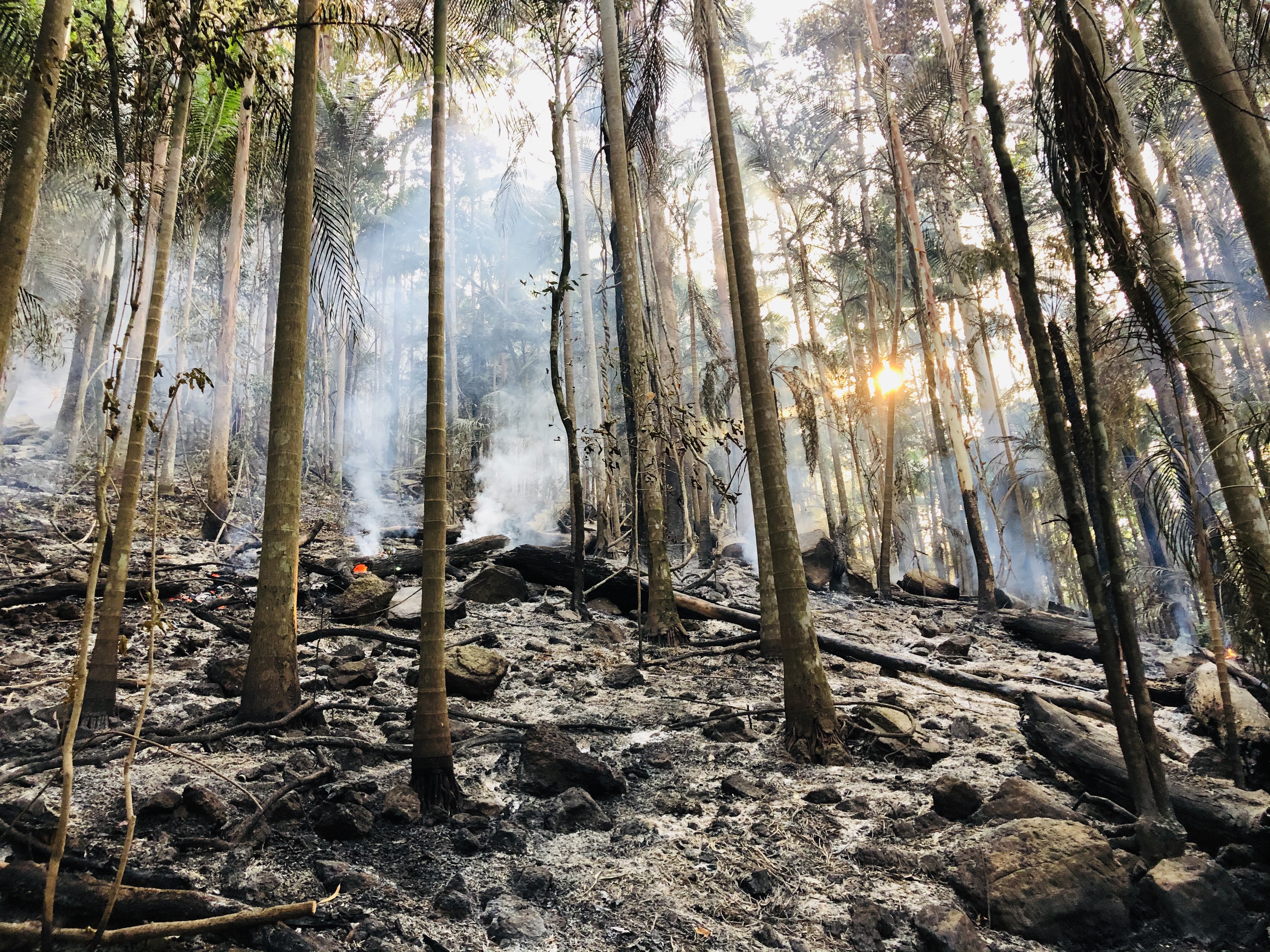 
Why this rainforest is so ecologically important

The subtropical rainforest of Northern NSW is called ‘The Big Scrub’. While only 1% exists of its former size, the remaining rainforest patches that have survived years of logging for agriculture and development are internationally important. This rainforest has outstanding examples of significant ongoing geological processes and outstanding examples of major stages in the Earth’s evolutionary history as well as ongoing evolutionary processes.

These areas contain an outstanding number of songbird species, including lyrebirds, scrub-birds, treecreepers and bowerbirds and catbirds, belonging to some of the oldest lineages of passerines that evolved in the Late Cretaceous. The rainforests have been described as ‘an archipelago of refugia, a series of distinctive habitats that characterise a temporary endpoint in climatic and geomorphological evolution’.

Why rainforests need our help recovering

What we learned from the devastating bushfires is that rainforest does not recover like other Australian forests. The rainforest that burnt still needs our help, so do the species that call it home. There are many plants in Australia classified as “Pyrophiles", plants requiring fire in order to complete their cycle of reproduction,  such as opening seed pods when burnt.  Rainforest plants do not have this response to fire. In the first case, it should not burn, however the 2019-2020 bushfires came after a severe drought that caused the rainforest to become drier than it usually is and extremely vulnerable to fire given how many exotic species now inhabit the rainforest because of human intervention.

Longer term impacts will be known once on-ground monitoring has been completed. Existing mapping suggests many areas have not been subject to wildfire since the 1950s, so a reasonable assumption is that the 2019-2020 fire events may lead to new responses not previously documented. The combination of long-term drought (moisture deficiency) and extreme fire weather (high temperatures, strong winds, exceptionally low humidity) resulted in fire impacting on fire sensitive mesic forest types in a way not previously observed.

The impact of these fires in terms of both the size (of individual fires) and scale (numbers of fires across the landscape in one season) is considered an unprecedented event. While weather conditions resulted in areas being burnt at high intensity, there was a mosaic of fire intensity across the property. 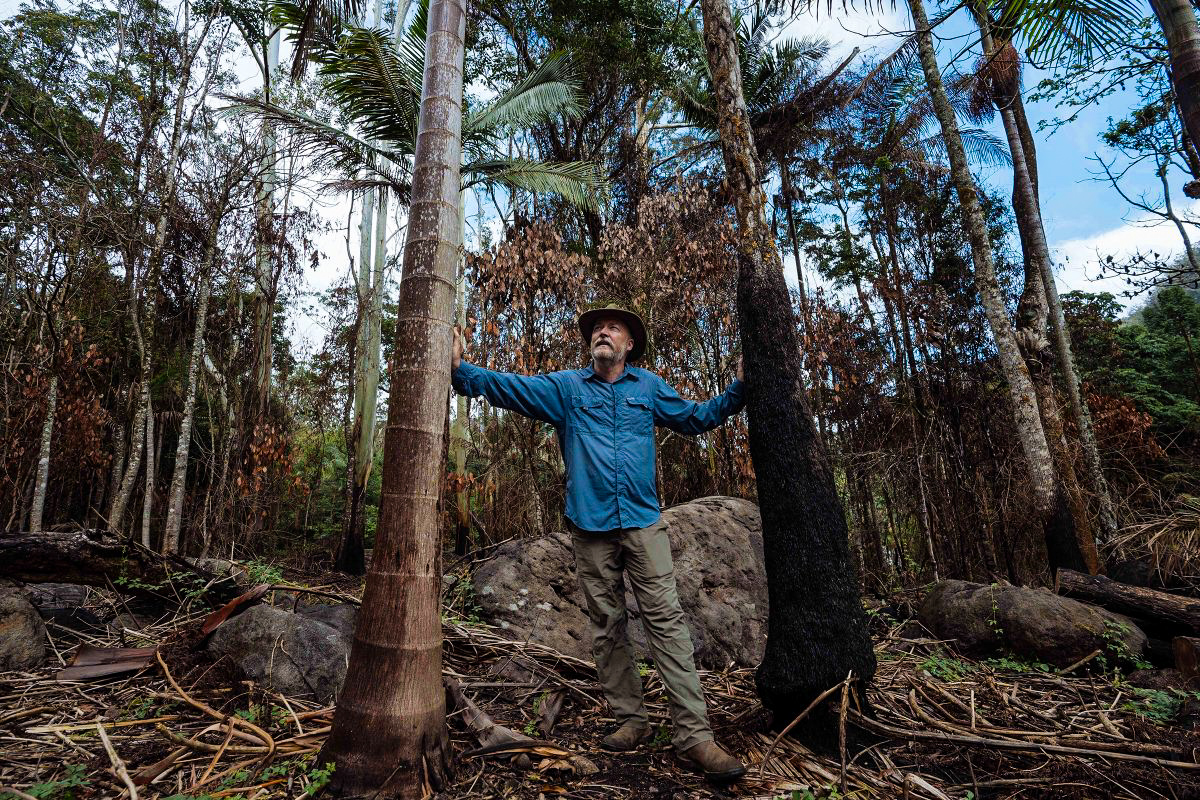 
What we have learnt so far

On the burnt sites we have seen and the sites we have been working on, the fires left open areas in the rainforest. When there are openings it invites invasive weed species to spread through these open areas. This presence of fast growing (and spreading) weeds inhibits native seeds from germinating and from native rainforest from regenerating. They also provide very little food or habitat for native wildlife.

We need to remove these weeds to rebuild this rainforest and recover the damage from the bushfires. Removing these weeds and planting trees on these thousands of hectares will rebuild beautiful, functional, rainforest. 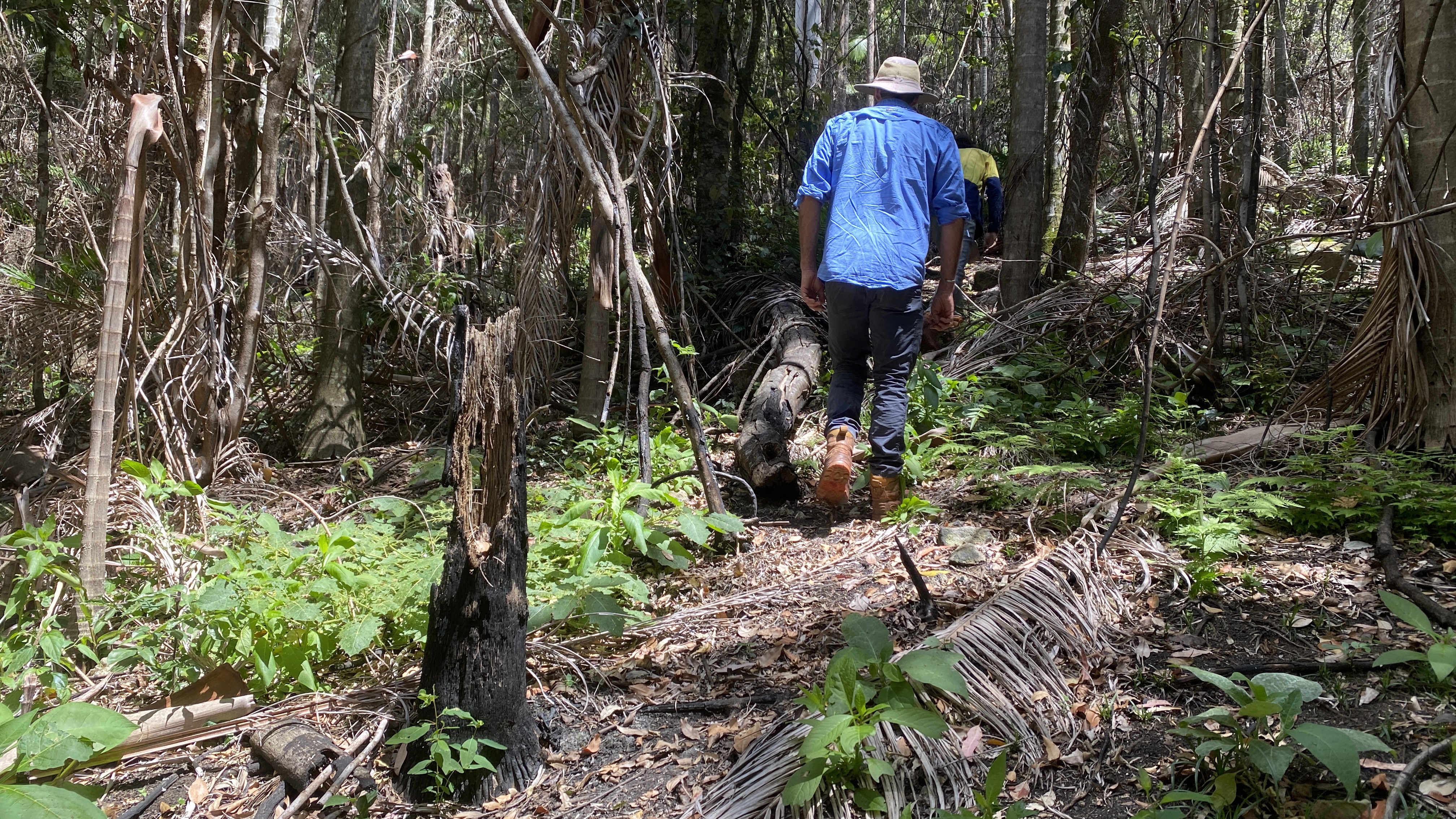 Walking through burnt land with invasive weeds quick to establish themselves in the open canopy. Plenty of light makes it easy for invasive and fast-growing weeds to take over.

Rainforest 4 Foundation began our Bushfire Recovery Response Project In April 2019. We are currently working on three sites, one in Wanganui and two in Huonbrook.

We are collaborating with ecologists, expert rainforest regenerators including Indigenous bush regenerators, landcare groups, landholders and local community. Firstly the burnt properties were identified, landholders contacted, and ecological site plans were made. Then we got to work and invited local volunteers and landholders to participate in the removal of burnt debris, invasive weed species and planting trees. 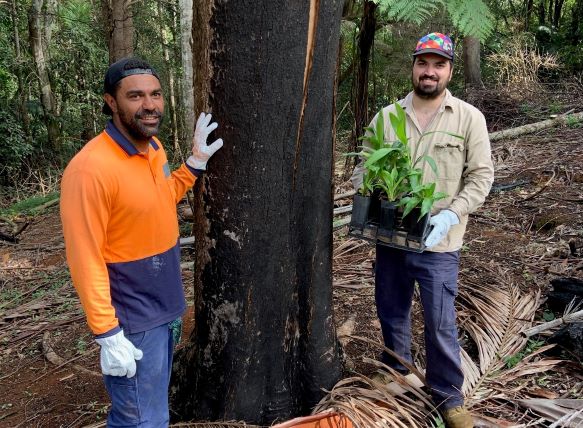 What we have achieved so far

We are one third of the way to our goal!

We look forward to sharing our progress with you. Stay tuned for more articles and updates from the field. 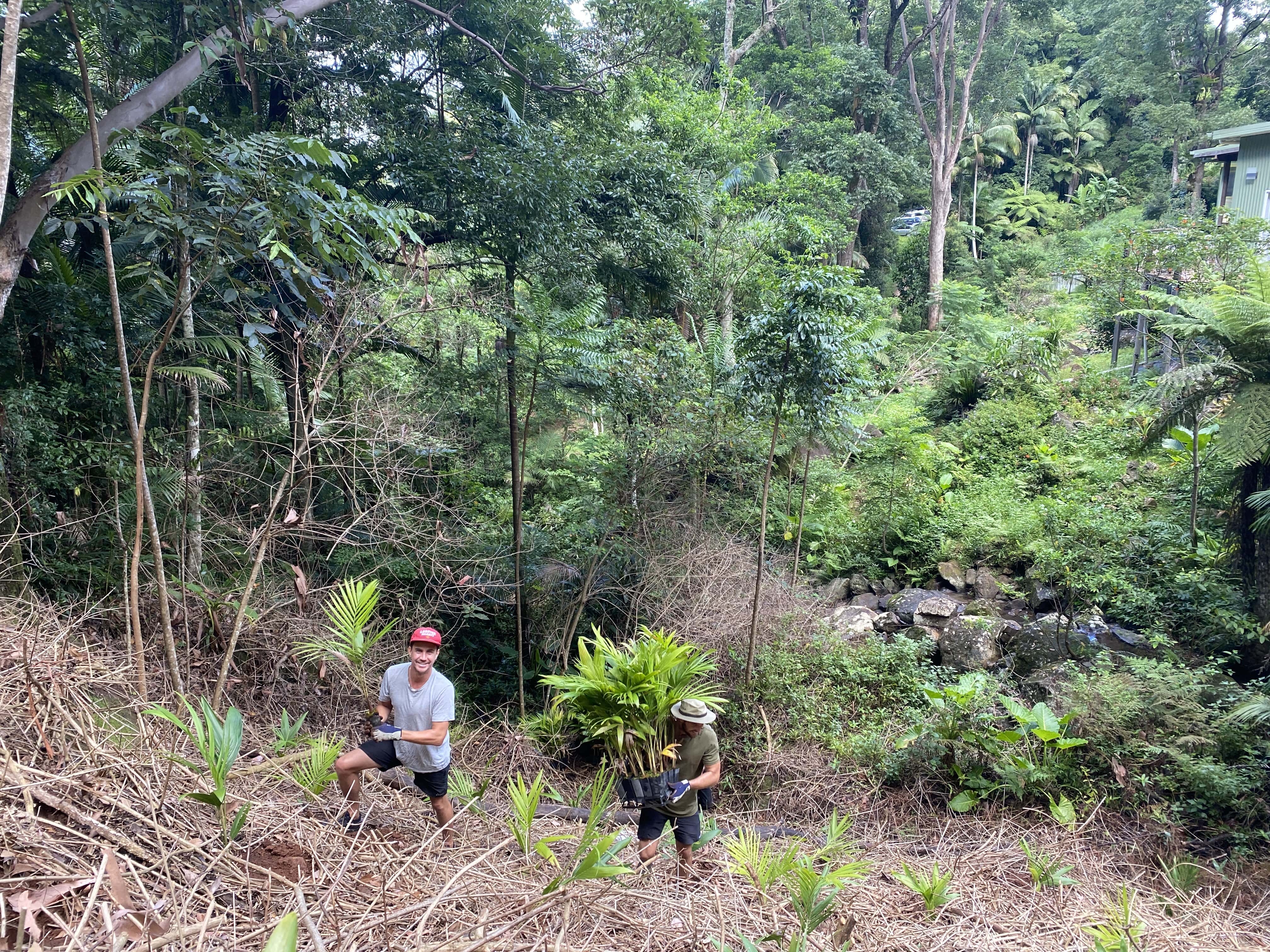 On site in Huonbrook with volunteers from InGrained Foundation.

A big thank you to InGrained Foundation and Landcare/WIRES for their generous support
through two grants received in 2020 for bushfire recovery.